The Fastest Navigation Layout for a Three-Level Menu

When users navigate an interface, there’s a need for speed. The faster it is for them to find what they’re looking for, the more time they’ll save on their task.

Speed is essential for menus that contain multiple levels. The more levels a menu has, the longer it takes to navigate. A common navigation pattern is a three-level menu. You’ll often find it on dashboard interfaces and desktop applications. The easiest way to optimize the navigation speed of a three-level menu is to design for the fastest layout.

A research study (A comparison of three-level menu navigation structures for web design) has shed some light on which layout is fastest to navigate. They evaluated various three-level menu layouts based on several criteria categories. 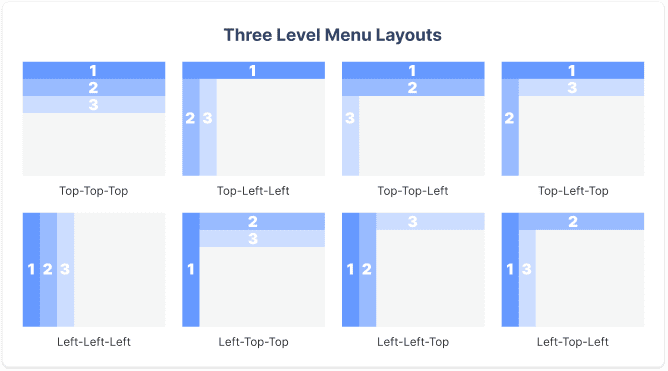 A hesitation is when the user hesitates to move their cursor from one menu level to another. The left-top-top had the least hesitation out of all the layouts, and the top-left-left had the most. There was a significant decrease in hesitation when the secondary and tertiary levels were on the same plane.

Left-left-left and top-top-top had the fewest cursor movements, while top-top-left and top-left-top had the most. This effect makes sense because when all menu levels are on the same plane, it’s harder for users to move their cursor to the wrong plane.

An overall score was given to each layout based on their performance for all criteria categories combined. The best performing navigation layout was left-top-top, followed by left-left-left. The two worst-performing ones were top-top-left and top-left-top. Out of the two best, left-top-top was faster than left-left-left by approximately 17 seconds.

Left-left-left is slower than left-top-top because when all the menus are on the left, it requires users to scroll through the list of items. As the levels expand and go deeper, users have to scroll more and can no longer view all the primary items on a single screen. However, the benefit left-left-left has is that users can consume more content per screen view. Users spend less time navigating the content screen, but it’s a tradeoff for more time navigating the menu.

The screen view advantage for left-top-top allows users to view more primary items at a time no matter how deep they navigate. However, they see less content per screen due to the top navigation bars. As a result, users experience less menu scrolling but more content scrolling.

No matter which navigation layout you choose, left-left-left and left-top-top are both winners. There are give-and-takes between screen view and scrolling, so it’s important to evaluate what’s more important for your UX.

It’s possible you can increase the content screen view for left-top-top and still reap the benefits of less menu scrolling. By temporarily hiding the top navigation bar when users scroll down the screen, they can get a full content view. When they scroll up, the bar will reappear. The assumption is that users are viewing content when they’re scrolling down. When they scroll up, their intention to navigate is more likely.

In my opinion, left-top-top is the winning navigation layout. Not only is it a few seconds faster than left-left-left, but it allows users to recognize which primary category they’re on. When you have multiple menu levels expanded in the left sidebar, it takes more effort to recognize which level you’re on. It’s also easier to mix up secondary and tertiary items since they’re so near each other.

Of course, left-top-top isn’t the best choice for every use case and interface context because there are exceptions to every rule. But overall, it appears to perform superiorly to all other three-level menus.