Laravel vs Yii2 Best Web Frameworks for Building Your Website

More than 80% of all the websites including the big fish like Facebook.com, Wikipedia.org, WordPress.com, and Pinterest.com are built with PHP which makes it the major server-side scripting language in the universe of web development. 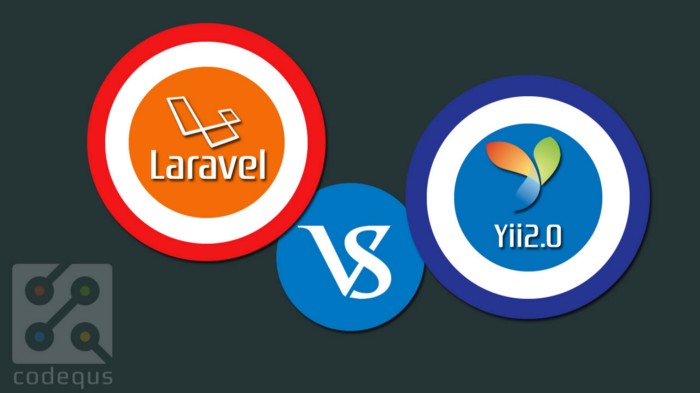 There are eight more or less popular PHP frameworks today, however, Yii and Laravel tend to make it difficult to make a choice. When you look at Google Trends graphic, you see that at some point Yii was much more popular, but then something happened, and the situation changed drastically. If you ask any backend developer at JustCoded what they prefer more, you will hardly find a person who will say both frameworks are good to work with. There always has to be a winner and a scapegoat. Is it the hype? The marketing? And how are you supposed to determine the right technology for your project? We will look deeply into Laravel first.

What you should know about Laravel

First, let us say a few words about why a PHP framework should be used in web development instead of native PHP:

The first release of Laravel happened 11 years ago. Written in PHP 7, this open-source framework is by far the most widely used among the others. Initially, the framework was designed as an alternative to CodeIgniter for creating web apps using the MVC (model-view-controller) pattern. The platform is intended for building complex and meticulous code bases. Laravel has inherited its power from various solutions; both built on PHP and other frameworks: Ruby on Rails,ASP.NET.

The key features of Laravel are:

The dev team behind the Laravel framework claims that their product is the best solution for fast development.

A few facts about Yii

The official release of the framework was in 2008, the current version of Yii is 2.0.15. Despite the fast-paced development, Yii is still lagging behind Laravel according to the usage statistics. The official website claims that Yii is a fast, secure and efficient PHP framework designed for creating bespoke web applications. Just like Laravel, Yii has an open-source code and was initially intended to eliminate the disadvantages of PRADO framework.

The advantages of using Yii

In short, Yii is a perfect fit for web applications demanding high-performance and logical coding.

Laravel or Yii for web development: who is the winner?

Now let us have a closer look at the frameworks and discover similarities and differences between Yii and Laravel.

Both frameworks can be set up with a Composer, a PHP package manager. After downloading you have a built-in web server and a working website sample. Laravel also has a simple helper to speed up the installation with a standalone command line tool. When setting up a Yii project, you will get an advanced template deployed on your environment. It has a separate backend and frontend that you can use for developing the admin area and a user-facing site, for example. Laravel installed a much simpler “example” project – a simple blog. However, it has a better structure comparing to Yii. With that said, we created a modern Yii2 project starter, which is very close to a new Yii 3 coming up next year.

Laravel: the validator stays as a separate class allowing developers to do the validation whenever and wherever they want. Also, it’s possible to extend the Eloquent class using custom methods. As for the scenario-based validation, its mechanism has not been thoroughly thought through. There is no way one can define attributes with fillable property based on multiple scenarios. For this purpose, you will need to customize the code.

Yii: the platform has a unique client-side validation coupled to the class of a form or a model. One can set rules and check the compliance of form validations with these rules once the data is received and filled in ActiveRecord. In case you have another form altering the data in a model, you will need either to develop a specific class for it or apply custom validation scripts. It’s very convenient until you don’t need your own verification methods.

Both solutions come with a multitude of awesome extensions for lots of scenarios. Any drawback of a framework can be turned into an advantage with the help of a couple of extensions. They’re super easy and handy both for freshmen and experts.

Laravel: some may find it surprising but Laravel lacks ready-made tools for access control. However, this problem can be solved with a snap of a finger – by using one of the extensions.

Yii: to be honest, Yii offers much more when it comes to security issues. It has a configurable built-in Role Based Access Control. It doesn’t mean that Laravel is worse, you can enable similar security features from configuration or use an external extension.

Both Laravel and Yii have excellent migration tools enabling dev teams to organise the working process in a smooth and convenient way.Also, both of them allow the database seeding. In Yii, you can generate a fixture and use it to seed the database.

Both frameworks have millions of supporters all around the globe and their number is increasing every day. Laravel is rather geared to skilled developers while Yii is easier to start with and is accessible for everyone. Besides, Laravel has great publicity and promotion. The famous Laracon will happen in July 2019 at the Play Station theatre in New York. Newbies can always rely on the helping hand of experienced Yii specialists.

Laravel: the docs are well-prepared and detailed, although for middle-skilled specialists the language may seem to be a bit complex.

Yii: the documentation was not well-documented, but it has been updated recently and offers a lot of useful information. It’s written in a generic way so that even those with basic programming skills can master the development process.

To make the results of the overview more illustrative, we’ve created a comparison table.Let’s dive into the tech specifications of Laravel and Yii.

Yii vs Laravel for web development

What to choose – Yii or Laravel?

These questions are to help you with choosing YOUR framework.

We can say that Laravel is perfect for the large-sized and complex web applications as it is equipped with numerous features. Yii is a convenient and comprehensive tool for smaller projects, and each framework has its own pros and cons which are important to take into account:

The biggest benefit of Laravel is its laconic core system with highly organized components, which allows Laravel enthusiasts to write elegant code. Laravel has inherited the best PHP practices and this fact attracts more and more programmers all around the globe. The learning curve for mastering Laravel is very steep and not every newbie can overcome it. However, they have all the resources needed for learning and even a Laravel course called Laracast!

Yii’s “one-click” installation, out-of-the-box tools for CRUD and authentication, built-in widgets and solutions work perfectly for swift coding. Although it’s older than Laravel, version 2 is still fresh and educational resources for learning it require fine-tuning.The takeaway is that there is no winner in this battle, sorry for the false expectations.Before you rush to either Laravel or Yii, think hard about what exactly you need from the framework. After all, your goal is to have a working website no matter what tools have been used for its development.

Drop us a line if you are doubting about the technology for your project – we’ll try to consult you and suggest a suitable solution.

Maybe it’s not PHP at all?